White tea is one of six types of tea made from the Camellia Sinensis plant. Regarded as one of the rarest tea types, it is easily recognizable by the tiny white hairs on each leaf and bud.

White tea is the least processed of all pure teas, undergoing minimal processing to retain its sweet and delicate flavor. It is due to this profile and appearance that white tea is so highly prized.

White tea can be traced back to the Tang Dynasty (618 – 906 AD). During that time, only emperors were allowed to consume the tea, and were offered each cup by young, white glove-wearing virgins.

During this time, the white tea was served in a similar manner to matcha: powder whisked in wide ceramic bowls. During the Ming Dynasty (1368 – 1644 AD), the court ruled that emperors could only be served loose leaf tea – and thus, modern-day white tea was born.

White tea is highly regarded around the world for its unique character. The farmers that produce each cup of white tea are all extremely skilled, and if you taste carefully, you will notice the high level of knowledge, passion, and artistry in each brew.

White tea consists of only the youngest tea leaves and unopened buds, ensuring that the flavor is young, light, and fresh. When the leaves are growing, some tea makers will cover the leaves so that sunlight doesn’t cause them to produce too much chlorophyll. To do so would change the flavor profile, and turn the leaves from a white to a green color.

The leaves are picked during the first few days of each year’s first flush (generally mid-March to early April), and only on days when it is not humid or raining.

The leaves are then withered for up to 72 hours, where they are gently rolled to release the flavor. After this, the leaves and buds are dried in the sun, halting the oxidation process. This both preserves the downy hairs and the healthy compounds.

Sometimes, the leaves are dried in temperature-controlled ovens at 230°F/ 110°C, bringing the moisture content down to just 1%.

The leaves are then carefully sorted into different tea grades, shaped, packaged, and ready to be enjoyed!

White tea is known for its soft and sweet flavors, which are typically smoother and lighter than other teas.

The aroma is typically floral and clean, with darker smells and flavors such as wood, grass, and earth being quite rare. Due to the refreshing aspect of white tea, it can be consumed throughout the day and is a great ‘beginner’ tea.

It is said that before white tea has been brewed, it contains the most caffeine out of all the tea types – even black tea and matcha. However, due to the fact that white teas are generally steeped for a shorter period of time than other teas, the caffeine content in each brew tends to be significantly less.

Some studies state that white tea has only 6-55mg of caffeine in every 8oz cup[1], which is 15% less caffeine than most green teas. However, the longer the leaf is steeped for, the more caffeine will be released.

There are five main types of white tea, and they all differ in terms of flavor and appearance. Starting from the highest to the lowest grades, they are:

Silver Needle (Yin Zhen Bai Hao): Silver Needle is considered to be the very best of white tea, grown in Fujian in China. Like the following four teas, most Silver Needle white teas are made from the Da Bai variety of the Camellia Sinensis plant. Consisting of buds with 30mm long, needle-like silvery tips, there are no stems or leaves in a batch of Silver Needle. This results in a sweet, floral, and woody taste, along with a golden liquor.

White Peony (Bai Mu Dan): Also grown in Fujian, White Peony is considered to be an extremely high-quality tea, consisting of two leaves and a bud. It typically has a stronger profile than Silver Needle, with a full body and a floral, sweet, and nutty taste. The liquor is typically a pale green color.

Tribute Eyebrow (Gongmei): Tribute Eyebrow is grown in Guangxi and Fujian. This tea is made only from young leaves with no buds, and as such, has a darker and fuller flavor profile. The taste of the liquor often resembles an oolong, with strong, fruity notes.

Long Life Eyebrow (Shou Mei): This tea is also grown in Guangxi and Fujian. Typically comprised of the leftover leaves unsuitable for Silver Needle and White Peony, Long Life Eyebrow has a darker color and a golden-yellow liquor. Due to the fact that it is harvested later in the season, it is slightly more oxidized and has a bolder flavor profile and aroma.

DaBaiCha (Fujian New Craft): Of course, Fujian New Craft is grown in the Fujian region of China, with harvesting only having begun in the 1960s. The leaves are long and curly and rich green-brown color, with their flavor profile being bold and robust.

There are several other types of ‘white tea’ around the world, although many experts do not classify them as true white teas as they do not use the Da Bai varietal. These are Darjeeling White, Imperial Himalayan White, Ceylon White, and African White.

Promotes a healthy immune function.[2] One study showed that white tea is better than green tea at fighting against harmful bacterial viruses. Not only does the tea display anti-fungal properties, but it helps to combat yeast overgrowth.

Protects the teeth from bacteria.[3] Due to the fluoride, catechin, and tannin levels in white tea, teeth are better protected from bacteria and sugar. The fluoride helps to prevent dental cavities by making the surface of the teeth more resistant to high acid levels, and the catechins and tannins inhibit the growth of plaque-causing bacteria.

It May help with weight loss.[4] White tea has a high level of caffeine and epigallocatechin gallate, which is linked to burning fat. When combined, these compounds seem to have a synergistic effect, stimulating fat breakdown and preventing new fat cells from being formed. They also help to boost a drinker’s metabolism by an extra 4-5%: the equivalent of 70 -100 calories.

Protects the skin.[5] The leaves of white tea are extremely high in antioxidants, which fight against the free radicals that cause oxidative stress. In this way, they help to restore skin that has been damaged from sun exposure and builds the skin’s resistance to age-related stress. Along with this, one study showed that applying white tea extract to a person’s skin can help to protect them against the harmful effects of the sun’s UV rays.[6]

May reduce the risk of heart disease.[7] Not only do the polyphenols in white tea help to relax the blood vessels in the body and boost immunity, but they may also prevent ‘bad’ LDL cholesterol from becoming oxidized. Along with that, one study showed that people who drink more than three cups of tea per day had a 21% lower risk of heart disease.[8]

How to Brew the Perfect White Tea

It is best to brew white tea with a lower temperature of the water, usually around 170°F (76°C). This is because if the water is too hot, the leaves can burn.

Along with that, it is recommended that you use filtered water to produce better flavor, avoiding the use of ‘hard’ tap water. This is because the chemicals in the water can alter the taste of the white tea and cause it to turn flat and lifeless. Good water is one of the most important factors in creating a good cup of tea.

To brew white tea, you should:

White tea has been an important element of Chinese tea culture for centuries, with popularity now expanding across North America and Europe. Of course, it is no wonder that white tea is quickly becoming a favorite amongst drinkers! 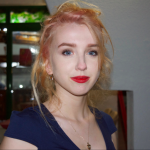 Amy Aed is a tea writer and taster certified by the International Tea Academy.

She has been working as a tea and travel editor at Wandering Everywhere for the past eleven years, and through that, has developed a deep knowledge of the much-loved Camellia Sinensis tea plant.

Amy now runs online courses surrounding the world of tea, delving into the multitude of intricate and complex tea cultures around the world.

Amy Aed is a tea writer and taster certified by the International Tea Academy. She has been working as a tea and travel editor at Wandering Everywhere for the past eleven years, and through that, has developed a deep knowledge of the much-loved Camellia Sinensis tea plant. Amy now runs online courses surrounding the world of tea, delving into the multitude of intricate and complex tea cultures around the world.