Originating from China, tea has gained popularity around the world in the past 2000 years and is one of the most widely consumed beverages in the world after water. Every day people from all over the globe drink approximately 3 billion cups of tea.

This age-old favorite drink comes with a long-standing claim that it is a diuretic and therefore it leads to dehydration. When we’re prodded to drink six or eight glasses of water a day, it is usually emphasized that drinks such as and tea do not count towards your daily fluid total because they’re dehydrating.

In this article we will separate fact from fiction: does tea make you dehydrated?

What is a Diuretic?

Diuretics can be found in natural compounds or are medications (commonly called water pills) that can be used to increase the amount of urine you put out to rid the body of extra fluid or salt.

Prescription diuretics are commonly called water pills, and their first effect is to increase urination. People with high blood pressure, heart failure, edema, and kidney disease often use diuretics to treat these conditions.

Some herbs and plants are considered ‘natural diuretics’ and include caffeine, dandelion, ginger, parsley, and hibiscus. These substances aren’t meant to be used to replace a prescription diuretic. If you have questions about diuretics and other treatment options, talk to your doctor.

Why is Tea Considered a Diuretic? Why are There Claims that Tea Leads to Dehydration?

Tea is a source of caffeine, so naturally, when it became widely reported that caffeine was a diuretic based on an old study from the 1920s, tea was placed in this category.

One of the most frequently mentioned studies was conducted way back in 1928 with a sample of just three people (which today would not be considered a high-quality study). Three men were studied over the course of two winters. Sometimes they were required to drink four cups of coffee a day; sometimes they drank mainly tea and at other times they abstained or drank water laced with pure caffeine.

Once we drink caffeinated beverages (in very large doses), caffeine passes from your gut into your bloodstream and makes its way to your liver. There, it’s broken down into various compounds that can affect how your organs function. Caffeine can cause your body to produce more urine by increasing the blood flow to your kidneys, encouraging them to flush out more water.

Diuretics take water from your blood, helping you urinate out excess water. With less fluid in your veins, your blood pressure decreases. As such, these can also contribute to dehydration.

But when you look at the studies of more realistic quantities of caffeine, the diuretic effect is not nearly as definitive.

What many people don’t realize, is that for caffeine to have a diuretic effect, it requires high doses of 250–300 mg and some sources say up to 500 mg is necessary (the equivalent of about 4-12 cups of caffeinated tea, depending on how much caffeine it contains).

Of course, if you’re an avid tea drinker, and either consume enough cups daily and/or strong enough tea that you’re hitting that 250mg to 500mg mark, yes it can have a diuretic effect. Some people also may be more impacted by diuretics than others depending on factors such as their diet, genetics, health status, and physiology.

Nonetheless, there is a difference between something having a diuretic effect and leads to hydration. While caffeinated drinks may have a mild diuretic effect – meaning that they may cause the need to urinate – they don’t appear to increase the risk of dehydration.

When you drink, your body is already taking much fluid as it needs then you will pee to expel the extra fluids. In short, teas can increase urine production but do not cause to loss of more fluids.

A recent review of 16 studies reported that one dose of 300 mg of caffeine, or the equivalent of drinking 3 ½ to 8 cups of tea at once, increases urine production by just 109 ml compared to the same amount of non-caffeinated drinks.

In a study in the British Journal of Nutrition where people drank nothing but tea for the 12-hour duration of the trial, there was no difference in hydration levels between them and the people who drank the same quantity of boiled water.

Your body needs adequate fluid to function. This is true of every part of your body, from your cells to your organs. Getting adequate fluid helps you feel energized, helps flush bacteria out of your body, maintains electrolyte balance, protects your tissues, helps lubricate your joints, and so much more.

How much fluid should you drink a day? You probably know that it’s important to drink plenty of fluids, especially when you’re active and when the temperatures soar outside. But staying hydrated is a daily necessity, no matter what the thermometer says.

Water is a vital nutrient for your body, but you don’t necessarily have to drink plain water to take advantage of those benefits. About 20 percent of your daily fluid needs come from food. The rest can come from other drinks, which can include teas.

Sure, water may be one of the most recommended ways to get your fluid intake in, but most beverages, including teas, are 80-90% (or more) water. The amount of fluid that you consume when you’re drinking tea far outweighs any of the potential diuretic effects (which we’ve learned that you would have to drink an excess amount to feel these effects anyway).

A glass of water versus a large cup of tea will have the same impact on your body’s hydration, especially if you do not have any underlying conditions affecting water status and have overall healthy dietary habits (or even healthy-ish habits in all honesty).

Although we might notice needing to head to the toilet more when we’ve had a cup or two of tea, the fault is assuming and comparing this experience with the time we haven’t had anything to drink, instead of when we consume a similar amount of water. If you chose a glass of water instead of a cup of tea, you’d probably see the same effect.

Additionally, it has been shown that caffeine may have an even less significant diuretic effect in men and in habitual caffeine consumers. So those who have been enthusiastic tea drinkers for a long period of time would likely feel even less of its potential diuretic effects (meaning they probably have to go to the bathroom less frequently after consumption).

Do All Teas Have a Potential Diuretic Effect?

Herbal teas like chamomile, peppermint, or rosehip are made from the leaves, stems, flowers, seeds, roots, and fruits of various plants. Unlike other types of tea, they don’t contain leaves from the Camellia sinensis plant.

Therefore, they have technically considered herbal infusions rather than types of tea. Herbal teas are generally caffeine-free and unlikely to have any diuretic effects on the body and would also hydrate you just as much as drinking water.

Traditional teas such as black or green teas contain anywhere from 5-20mg caffeine (decaffeinated teas) to 40-80mg caffeine (caffeinated teas). Even with these varying amounts of caffeine, you would still need to drink such a large amount daily to get even the mild diuretic effects from the caffeine, and the amount of liquid consumed along with the caffeine would outweigh any of those diuretic effects.

Yes, caffeinated teas can have a mild diuretic effect under certain conditions. However, no, tea doesn’t cause dehydration under average consumption. Research has shown that when consumed in moderate amounts, caffeinated drinks, including tea, are as hydrating as water.

However, consuming large amounts of tea, for instance, between 5-15 cups depending on the amount of caffeine in each cup may have an insignificant diuretic effect but still wouldn’t lead to dehydration in healthy individuals.

Any liquid you drink or take in through food (fruit, for instance) counts towards your hydration, not just water. Your kidneys filter the liquid and extract water for your body to use. Caffeinated drinks such as tea can absolutely contribute to your daily fluid requirement.

Additionally, the flavonoids in tea have antioxidant and anti-inflammatory properties that support overall health, disease prevention, and can also aid in digestion, relaxation, weight loss, and help to dissolve plaques in blood vessels.

Overall, tea can provide a flavorful and health-promoting alternative to plain water in helping you reach your daily fluid requirements.

Ruxton, C. H., & Hart, V. A. (2011). Black tea is not significantly different from water in the maintenance of normal hydration in human subjects: results from a randomised controlled trial. British journal of nutrition, 106(4), 588-595.

Eddy, N. B., & Downs, A. W. (1928). Tolerance and cross-tolerance in the human subject to the diuretic effect of caffeine, theobromine and theophylline. Journal of Pharmacology and Experimental Therapeutics, 33(2), 167-174. 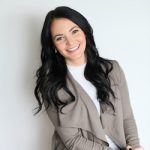 Felicia is a Registered Dietitian and nutritionist with a Master’s in Applied Human Nutrition. She has a strong wellness background and experience of working at research centers and healthcare/private practice for 12+ years. Felicia is passionate about helping others fight through the massive amounts of nutrition misinformation in the online world, and to navigate life and health, but most importantly, enjoying it while doing it.