Mocha has been a favorite comfort drink for ages. Although they are one of the newer espresso drinks, they quickly rose to popularity after their introduction in the 1700s. Mocha is the perfect combination of sweet chocolate and bitter espresso.

Chocolate has long been a term used to describe certain flavors found in coffee. This is especially true for dark roasts. Dark roasts a renowned for their rich flavors including caramel, various nuts, and, of course, dark chocolate.

Adding actual chocolate to a dark roast coffee is the perfect way to accentuate these delicious flavors and balance the sweetness and bitterness. These ingredients have been used in tandem with each other for centuries and are still heartily enjoyed today.

Mochas are so popular today that they can be ordered nearly everywhere. They are incredibly easy to make and are the perfect drink to cheer up any type of morning.

What is a Mocha?

Mocha lattes are a variation of a caffe latte that includes chocolate flavors, typically in the form of a chocolate sauce or syrup. Mochas are often referred to as mocha latte or Caffe mocha latte in Italy and other parts of Europe.

Latte refers to a drink of steamed milk that does not inherently include any espresso. Mocha is a common term used to refer to liquid chocolate or a chocolatey coffee depending on who you ask. This is why, if you order a mocha in Italy, it is important to ask for a Caffe mocha latte.

This traditional name for the chocolate espresso drink was shortened to “mocha” in America. Although mocha just means chocolate and doesn’t refer to the espresso or milk the drink contains, it has become so commonplace in the states that nearly every barista will know what you mean.

Mochas are built like lattes, but they contain a chocolate flavor as well. Mocha lattes are often flavored with bitter chocolate syrup, but there are many other ways to add chocolate to this rich espresso drink.

A traditional mocha will contain espresso shots, a large amount of steamed milk, some mocha syrup, and is topped with milk foam. The combination of the rich espresso, creamy milk, and sweet chocolate makes for a delicious and addicting drink.

Mochas are a lot larger than traditional Italian cappuccinos. They are usually as big as 12-20 ounces in America. Unlike cappuccinos and macchiatos, mocha lattes allow all their ingredients to mix, creating a blended and balanced taste. This is like lattes, which is why mochas are often compared to them.

While mochas are typically much sweeter than an unflavored espresso drink, they are not inherently sweet tasting when compared to candy. Mochas do not taste like Hershey’s chocolate bar. The chocolate syrup that is often added to the espresso is very dark and bitter, containing very little sweetener.

A mocha latte’s chocolate notes will taste more like a dark chocolate candy bar than a Hershey’s milk chocolate bar. Several variations of the mocha are much sweeter than the older mocha latte, which is still slightly bitter.

Another variation of the mocha latte includes the marble mocha, which is a combination of the original mocha chocolate flavors and white chocolate mocha flavors. This drink is the most similar to a coffee version of a milk chocolate Hershey’s bar.

Mocha lattes are often made by combining hot chocolate and espresso. While this drink is still chocolatey, it is also a lot sweeter than the mocha latte. Other mocha variations will often include multiple flavors such as vanilla and hazelnut.

Mochas are one of the most experimented with espresso drinks. Chocolate is a flavor that works with nearly every ingredient, which is why it tastes so good in coffee!

History of the Mocha

The Caffe Mocha was not always the hearty chocolate-laden latte we all know and love today. The Caffe mocha latte started off as a mochaccino. Mochaccinos was first introduced in Italy during the early 18th century.

Originally, the term mocha was not associated with chocolate. This term came from a place in Yemen called Mocha City. Mocha City was well known for a particular type of coffee bean. This coffee bean had many unique flavors. One of which was chocolate.

Mocha City popularized the chocolate Al-Mocha coffee beans and led to modern-day arabica beans becoming the most widely used coffee beans on the planet. These coffee beans have many other flavor profiles and are grown and traded everywhere but their origins stay in Yemen.

The term mocha didn’t refer to chocolate until after coffee gained popularity. This was in Europe during the 16th century. During this time period, chocolate and espresso or other coffee brews were often served together in various ways.

One of the many combinations of chocolate and espresso that gained popularity in 16th century Europe was a drink referred to as the bicerin. It was named after Cafe Bicerin in Italy.

The bicerin is a small coffee filled with half espresso and half chocolate syrup. This drink is layered like a macchiato, but it is sweet like a cappuccino or a latte. The bicerin quickly gained popularity in Italy and from there, the rest of the world.

The bicerin is the earliest known chocolate espresso drink and is often considered the predecessor of the modern-day mocha latte. The main difference between the bicerin and the mocha latte is the addition of steamed milk. Mocha lattes are actual lattes that have had chocolate syrup added.

The bicerin resembles a macchiato more closely. Macchiatos are traditionally served as a single shot of espresso with a dollop of steamed milk to cut the bitterness of the espresso. Instead of using steamed milk, the bicerin uses chocolate sauce.

How to Make a Mocha

First, brew the espresso and begin to mix it with the chocolate sauce. This makes the chocolate easier to taste throughout the drink. Second, steam whole milk and slowly pour it into the drink, allowing some milk foam on top.

This drink can be topped with whipped cream or with marshmallows. There are many variations of a mocha due to decades of experimentation. The chocolate sauce a mocha uses can be substituted for cocoa powder and sugar.

Cocoa powder and sugar can give this latte variant a richer and more chocolate taste than using chocolate syrup. Many people prefer using cocoa powder to the chocolate sauce because they can control how sweet their mochas are by playing with the amount of sugar.

Mochas can also be made in a pinch with instant hot chocolate packets, but these mochas will most likely taste much sweeter than a typical mocha. The sweetness of a mocha latte varies depending on preferences, culture, and the barista.

To make a white chocolate mocha, try melting 2 teaspoons of white chocolate chips with the freshly brewed espresso. If you want a darker mocha, add a pinch of cocoa powder to create a slightly bitter taste.

The mocha latte might be the most experimented with espresso drink besides the classic cafe latte. As a result, there are plenty of variations of this drink. Most popular, however, might be the white chocolate mocha.

Many other flavors have been added to the traditional mocha to create holiday sensations such as the beloved peppermint mocha. This drink is created with peppermint syrup but can be made at home with a dash of peppermint extract added to your classic mocha latte.

To brew a traditional bicerin instead of a modern mocha latte, brew a single shot of espresso and add chocolate syrup to the top. This drink often included a dollop of milk foam or whipped cream according to preference. It is a delicious drink that can help you connect to coffee lovers of the past.

The mocha latte is a wonderful chocolate espresso drink that accentuates coffee’s bitter and earthy flavors with a touch of sweetness. The creaminess of the steamed milk and the whipped cream make the mocha latte truly unmatched.

The modern mocha latte we all know, and love have come a long way from the original drink. The bicerin contained mostly espresso with a dollop of cream occasionally. Although the chocolate syrup and the espresso stayed the same, anyone who has had both drinks can agree that they taste fundamentally different.

Mocha lattes have become one of the most popular espresso drinks across the world. It just goes to show that chocolate and coffee are a powerful flavor combination. 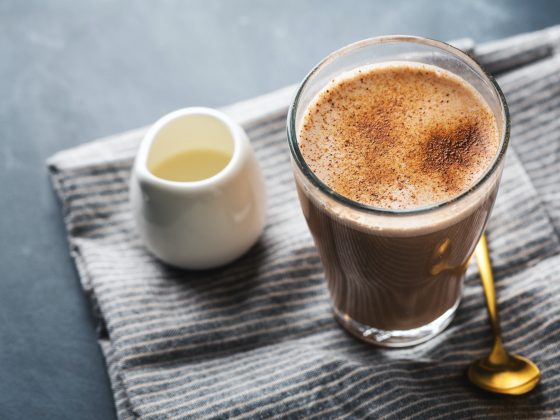 What is A Cappuccino? All You Need to Know