There is often a lot of confusion about what a cappuccino is. This may be because a cappuccino varies depending on where you are ordering it. In Italy, a cappuccino is traditionally ordered during the mornings. This beverage will be served with equal parts rich espresso, creamy steamed milk, and velvety milk foam. This delicious combination perfectly accentuates coffee’s intense flavors and creates an amazing morning coffee.

Many people believe cappuccinos are a variation of the latte, but there is a lot more to this foamy drink. Cappuccinos, unlike lattes, are layered drinks. Perhaps the biggest distinction between the two is the latte’s inherent lack of espresso. In Italy, ordering a latte will result in a mug of steamed milk with nothing else. Cappuccinos always have espresso as well as steamed milk and milk foam. They are the go-to coffee order of this part of the world.

Cappuccinos are a deliciously creamy and rich espresso drink that can be ordered anywhere there is an espresso machine. Their rich and velvety milk foam will always leave you wanting a second cup.

What is a Cappuccino?

Cappuccino is often mistaken for being lattes but the two are very different. Cappuccino and latte are both made with the same ingredients, but they differ in how the espresso, steamed milk, and milk foam are combined.

While a latte combines steamed milk and espresso, it is only topped with a small portion of milk foam. The majority of the latte is filled with steamed milk. It is a deliciously creamy espresso drink but is not very strong or bitter compared to a cappuccino.

A cappuccino contains a lot more milk foam than a latte and its ingredients are distinctly layered. Lattes will often blend the milk and the espresso together, but a cappuccino does not. The espresso makes up the bottom layer and is topped with steamed milk and then milk foam.

Traditionally, a cappuccino is divided into thirds. One-third of the drink is espresso while the other two-thirds consist equally of steamed milk and milk foam.

What is more, a cappuccino from Italy is only 6 ounces. That is incredibly small compared to a 12-ounce standard cappuccino from Starbucks. Cappuccinos are a quick way to get your blood flowing in the morning because they can be consumed so quickly.

Oftentimes, ordering a cappuccino in Italy will result in a topping of chocolate syrup or spices. These can always be requested but options will vary depending on the Italian coffee house you are ordering from.

Cappuccino’s variations will also differ depending on where in the world you are ordering the famous drink but regardless of how they brew it, you will always get a large amount of delicious milk foam. Milk foam is cappuccino’s signature ingredient.

Milk foam is sometimes referred to as microform. This is because of how it was made. When milk is steamed, a top layer of foam is formed from the microbubbles that get trapped in the milk.

These microbubbles created by the steam wand give the milk a lighter and velvety feel. No cappuccino is complete without a large amount of milk foam on top to give the whole thing an airy feel.

History of the Cappuccino

The oldest known espresso drink we can attribute the modern-day cappuccino to originated from Vienna in the 18th century. This drink called the “Kapuziner,” was very popular in Italy but didn’t catch on in other parts of the world until after WWII.

The Kapuziner was a traditional espresso drink consisting of steamed milk and many aromatic spices. The modern-day cappuccino can have spices added to it, but these flavors are not an inherent part of the coffee we now call a cappuccino.

The name cappuccino is said to come from its unique color. Cappuccino’s beige color closely resembles the robes of Friars in Capuchin, Italy and so people started to refer to them when talking about this popular espresso drink.

The name “Capuchin” was slowly changed to cappuccino over time and has stuck to common vernacular. The word cappuccino was not found in Italian texts until the early 20th century, but we know the drink has been around for much longer than this under various other names.

The history of the cappuccino, and all coffee, is hard to find because of how much it was traded worldwide. Cappuccinos are a true staple of Italy and are the most commonly ordered drink. Cappuccinos are traditionally ordered in the mornings and most residents do not order it during the afternoon.

Although this is not a crime and nobody will stop you, it is not common to order a cappuccino after 12 pm. Instead, locals will order a macchiato because it is less sweet.

How to Make Cappuccino

Cappuccinos are brewed like lattes, the only distinction is the size, the layering, and the amount of each ingredient. A cappuccino is a 6-ounce drink split into thirds. One-third of the drink is espresso, usually consisting of a doppio.

The second part of the drink consists of steamed milk, or, in some places, steamed cream. The third and final part of a cappuccino is milk foam. The espresso, steamed milk, and milk foam are served in equal portions and layered on top of each other.

A cappuccino’s ingredients are not mixed together like a latte. It is often served with spices on top of the milk foam such as cinnamon, nutmeg, or ginger. Sometimes the cappuccino is topped with chocolate-flavored syrup, placed in the shape of a flower. These toppings are all optional.

Brewing a cappuccino requires three steps, just like how the drink can be split into distinctive thirds. The first step is to pull the espresso shots and place them in the coffee cup.

This is the simplistic explanation for how to brew a cappuccino. Read on to discover more details, tips, and tricks to brew the perfect cappuccino.

The hardest part of brewing a cappuccino is steaming the milk just right to create enough milk foam for the top. After all, a third of a cappuccino is made of milk foam and it is this espresso drink’s specialty.

When steaming milk, the steam wand should be placed inside the pitcher. The pitcher is then slowly lowered until the tip of the steam wand is close to breaking the surface of the milk. This is where most of the milk foam is created.

Once enough milk foam is created, lower the steam wand back to the bottom of the pitcher and allow it to heat the milk until the desired temperature is reached.

Many variations of the cappuccino include adding flavors, syrups, or spices to the drink. Try adding ginger or cinnamon to the top of the milk foam to give it a bit of spice.

Many people are fans of vanilla or hazelnut cappuccinos. This syrup is typically added to the espresso shot to mitigate its bitterness. Various syrup flavoring can also be added on top of the milk foam such as chocolate and white chocolate sauce.

While it is traditional for a cappuccino to be served in a 6-ounce cup, many American coffee shops serve cappuccinos in larger sizes. Some serve this drink in cups as large as 20 ounces.

Cappuccino is one of the oldest espresso drinks. They originated in Italy and quickly found a following in other parts of the world. While cappuccinos may not be as universal as lattes, they are just as delicious.

Cappuccino is one of the easiest espresso drinks to make because most of their uniqueness comes from how the ingredients are incorporated. The cappuccino’s distinctive, equal layers are what sets it apart from other espresso drinks.

Cappuccino has been around for centuries and will be popular for centuries more. This creamy espresso creation is the perfect way to start your day. Next time you are looking to experiment with your espresso machine, brew a cappuccino. Your tastebuds will thank you. 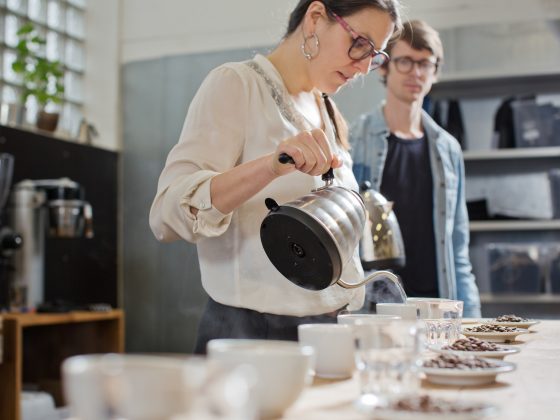